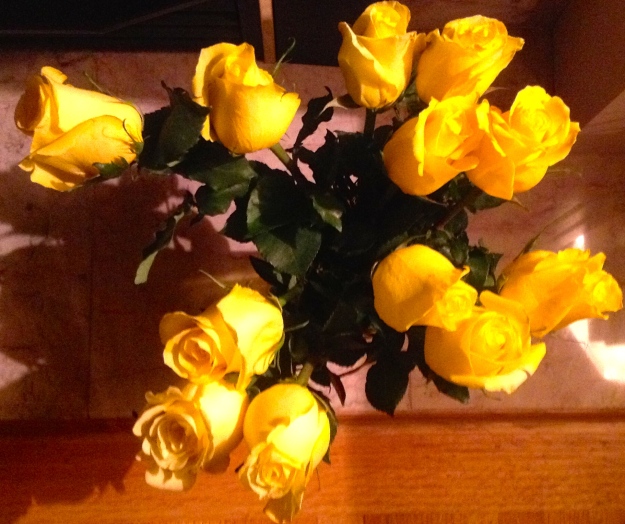 Mother’s birthday was on Christmas Day. She would have just turned 90 this year – about the same age as the queen. She has been gone a decade now but I will see her again one day. I felt impressed to buy some yellow roses in her honour this year to have at Christmas.

She too was a painter and a poet – a pioneer of sorts. Her favourite flowers were always yellow roses (yet in her old age she changed them to pink). Her own painting of yellow roses and blue delphiniums can be seen in the foyer of the spa at the historic Algonquin Hotel in St. Andrews-by-the-Sea, N.B. where she worked as a young woman after the war. The painting was donated to the hotel in her honour as one of New Brunswick’s own daughters.

Mother was one who loved God. She loved life, and children, and painting – probably in that order. In one’s ancestral tree there are particular people who shine. Their love blesses all who come after them. Mother is one of those whose children and grandchildren rise up and call her blessed (Book of Proverbs).

“Honor your father and mother” is the first commandment that has a promise attached to it, namely, “so you will live well and have a long life.” (Book of Ephesians)

This poem of Ann Weems reminds me of my childhood:

I gave my mother Evening in Paris

Sixty-five cents at the five-and-dime,

Everybody knew – in the second grade –

that ladies longed for perfume.

I wanted to give her something special …

no crayoned creation to hang in the kitchen,

no photo of me with a snuggle-tooth grin,

but a gift that no one else would use,

a present just for my mother.

I wrapped it in tissue

and signed it in cursive.

I thought it was the grandest gift anybody could give.

She thought so, too.